Posted on September 12, 2015 by callyinwonderland

So, my plans to go on a Dove Shoot got canceled due to inclement weather, mainly the beautiful fall air that has ascended upon us! Apparently, the dove tend to not fly as well when it’s chilly outside! That left my day wide open, and if you know me, I can’t spend the first day that feels like fall inside!

I have been seeing signs all week for Waveland State Historical Site’s annual craft festival. It’s my perfect scene; local craftsmen and history! OK, the free wine tasting was really what got me going, but I did spread the wealth to all the vendors  So, Trev and I loaded Bur up in the truck and headed out.

Obviously I’m going to start this adventure with the history of Waveland….The Greek revival mansion that sits on the property today, is not the original Waveland Home. The

original house was built by Daniel Boone Bryan, who was the nephew of the Daniel Boone you are thinking about. Daniel Boone’s sister married into the Bryan family, and Boone himself surveyed the land that he would bequeath to his nephew, who was a renowned historian, frontiersman, and poet in his own right. The original property was about 2,000 acres and at one time boasted being the largest hemp and rope producers in the nation. Waveland was named after the “waves” that were produced when the wind blew through the fields of wheat and hemp. During his reign, Waveland had a large gunsmith shop with over 25 men employed (Bryan himself was an accomplished gunsmith), manufactured saltpeter and gunpowder, a gristmill, blacksmiths shop, a Baptist church, women’s seminary, distillery and paper mill. Bryan and his wife, Elizabeth, managed all of this along with 12 children. They make us in the present day look like slackers!

Yes, they had a child’s size cabin and Bur had to play in it!

Joseph Bryan inherited the estate from his father and immediately went to making changes. His wife pushed him to builder a larger, grander home, so he tore down the old stone home built by his father, and built the manor we visited today. Bryan’s wife wanted many expensive amenities, so he cut corners in a few places to save money. For instance, instead of marble base boards, he used stone and painted them to look like marble. This Bryan was resourceful while keeping his wife happy….husbands of today, take note! Most of the materials to produce their home came directly from the plantation.

During Joseph Bryan’s tenure as owner, slaves were present. 13 to be exact; 10 men and 3 women. They were all clothes in outfits made by Bryan’s wife, Margaret, who made clothes for everyone living at Waveland. Lucky for her, the dewing machine was invented during her lifetime, making her job much easier! The women kept the house and cooked and the men tended the land. Each man was given 20 acres to work and a house to live in on their assigned acreage. This Bryan did not keep his slaves in the same way as others did at the time. They were given many freedoms and luxuries not allotted to most slaves of the time. They could hunt, sell at the local markets (being allowed to keep their profits), and were allowed to keep firearms and weapons. He also built their homes out of brick, making them warmer than the normal clap board houses normally built for slaves. However, he sis support the confederacy during the Civil War and gave them supplies. The Union Found out (Kentucky was really on the border about what side she wanted to be on for most of the war, but that’s a whole other post in itself!) and tried to arrest him, but he outsmarted them and fled to Canada. He returned to Waveland after the war, where is slaves, now freedmen continued working for him as paid employees.

He had a really good time 🙂

The last Bryan to own Waveland did not have the same work ethic and sense that his forefathers had. He lost his original home and had to move into Waveland with his parents. When they passed away, he and his family kept the plantation, but he was a horrible gambler. Other family members had to sell their homes so that they could pay his debts to keep Waveland in the family. However, eventually this lifestyle caught up with him and he was unable to pay off his mounting debts and lost the home to auction. The estate passed through several hands over the years until the Commonwealth of Kentucky bought it, and the only 200 acres that remained with it. The University of Kentucky now uses those acers for experimental agriculture research. Joseph Henry Bryan was not all bad. He did help Waveland to produce some of the most renowned trotter racehorse in known history. Waveland Chief, Ben-Hur, Eric, Olaf, and Wildrake all carried Waveland genetics, with Wildrake never losing a race and being bought by the Rockefeller’s in the 1880’s. He also built a racecourse on the property where he and other businessmen would watch from the rail, while the women, who weren’t allowed at the course were banished to the roof of the mansion to watch through binoculars.

The home is now a museum with daily tours for most of the year, and best of all, you can rent to property for parties and gatherings.

Now for my adventure! Waveland is a beautiful piece of property that has been kept as 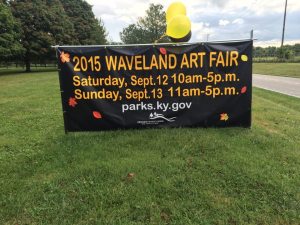 closely to its original state as possible. It’s also full of mystery….You never know what little garden you might find hidden around a corner or what secret the next hedgerow is keeping. I was lucky enough to stumble upon a wedding that was being set up, for later on this evening. What a glorious day for an outdoor reception in a secret garden! He had a great afternoon searching through the butterfly gardens, admiring the wears of local artisans, and sampling some great, regional cheeses and wines.

Chrisman Mill Vineyards & Winery is there with a beautiful variety of their wines, and the best part, tastings are free. They also had a magnificent Sangria that paired perfectly with the fall weather. Their Facebook page is here, so check them out for seasonal offerings. Boone Creek Creamery is out in full force with a selection of cheeses that will certainly please even the most discerning foodie. I am going to go on ahead and recommend the French Cheddar (for obvious reasons!) and the bread cheese, which apparently melts into one of the creamiest bowls of goodness you’ve ever had. I can’t wait to cook with it! You can check them out at www.BooneCreekCreamery.com and if you are looking for something fun to do one afternoon, visit them at their shop on Palumbo Drive in Lexington, Kentucky. You can tour the shop and see your cheese being made! I plan on going soon!

Other stand outs, in my opinion are Nora Swanson Arts. Her jewelry is amazing, and you 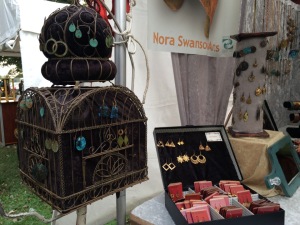 Some of their offerings…

can check her out online at www.nswansonarts.com.

Firefly Knits and Fibers up-cycles many old pieces of clothing (such as wool skirts and jackets) for a new life as a cute handbag or pillow. She has a set of owl pillows I plan on getting for Bur’s room! You can see her offerings at www.fireflyknitsandfibers.com.

If you are a photography buff like myself, you will appreciate Roy Craft Art’s booth. His pictures from around Appalachia are sure to inspire you. You can check him out at www.roycraftart.com.

Can’t get enough of these owls!

Other booths offered handmade baskets, several types of jewelry, soaps, stained glass and many other locally made items. Most of the artisans are producing what they sell right in their booths, so you can see their process. I know that there is something here for everyone! Oh yeah, there’s Kettle Corn too, and who doesn’t love Kettle Corn!

The craft fair is open again tomorrow starting at 11:00. You can tour the house with the price of your admission, which is $5.00 for adults and children under 12 are free. I hope you have time to stop by there and enjoy a pleasant afternoon at Waveland State Historical Site (http://parks.ky.gov/parks/historicsites/waveland/) and support our local artisans! 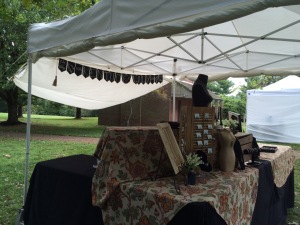 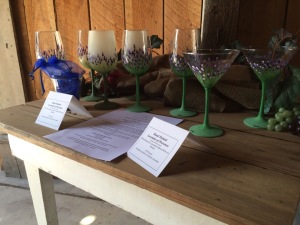