The History and Use of Bourbon!!!

Posted on September 30, 2015 by callyinwonderland 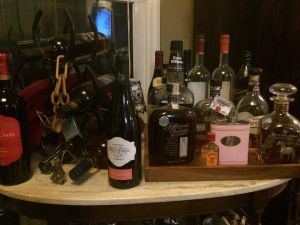 We ave a slight Bourbon obsession in my house….While some of that is wine, a majority is fine and hard to find Bourbons. Our wine rack has no wine on it!

To finish out National Bourbon Heritage Month, I thought I’d make the final blog Cocktails with Cally just about bourbon. I thought you might want to know exactly what makes this special liquor Bourbon and where it came from.

To start, let’s look at the name Bourbon. It was named after the French Bourbon Dynasty. The Bourbon’s ruled France during the 16th century when Henry IV became the first Bourbon king in France. Ultimately, their family went on to rule in many other countries in Europe, including Spain, Naples, and Sicily. It is mostly associated with Bourbon County, Kentucky, but some dispute whether or not it’s origins in the United States can be traced to Bourbon Street in New Orleans. For the sake of argument, let’s assume that Bourbon in the United States is associated with Bourbon County, Kentucky and New Orleans is just lucky enough to have a famous street names after one of our favorite libations.

Bourbon has been distilled since the 18th century, and consists mainly of corn. Bourbon is first noted in history in 1820, but is used consistently starting around 1870. Contrary to what many people think, Bourbon can be made anywhere in the United Sates, it doesn’t have to be distilled in Kentucky to be considered Bourbon. That rumor probably got started because the best and most sought after Bourbons come from Kentucky.

Lucky for us, Bourbon has a pretty well documented history. While there are many myths and lore’s that are associated with it, for the most part, we can tell a lot about this liquor all the way from its first conception. It is thought that Elijah Craig, a Baptist Minister no less, was the first to use charred oak barrels to age his distilled product. This helped to give it the rich, amber color we have come to know and love. Now, his neighbor, Jacob Spears, who hailed from Bourbon County Kentucky, is said to have been the first to market his spirits under the name Bourbon. More than likely, there is no one single person who can claim to have invented Bourbon. It is more likely that it was a collaboration between many distillers who tried each others drinks and made adjustments in their own process. Over time, the distilling process was refined, and the delicious libation we enjoy today was finally created.

The current bottle of one of the oldest Bourbons. Photograph courtesy of http://www.wikipedia.com

While most producers have their own recipe for the sour mash and process that they use to make Bourbon, they must all follow strict guidelines to be bottled and sold as Bourbon. First, it must be produced in the United States. While I’m sure other countries would love to produce their own version of Bourbon, the United States is the only place that can lay claim to its production. Secondly, it must be at least 51% corn. Other grains can be used, and rye is one of my favorites, however, the mixture must be at more than half corn. All Bourbon must be aged in brand new charred oak barrels. These barrels are reused in many different ways after the Bourbon is bottled (think aging beer, syrup, other liquors), Bourbon gets a brand new barrel each and every time it is produced. When it enters these brand new charred oak barrels, it cannot be more than 125 proof, which is 62.5% alcohol by volume. When it is bottled, it is 80 proof or more, making it at least 40% alcohol by volume. There is no ageing requirement for regular Bourbon, but from experience, I can tell you that the longer it ages, the better it tastes and the more expensive it is and gets much harder to find! This is because as the liquid ages in the barrels, the barrels absorb some of the liquid and some of it evaporates (that is called the Angels Share). So, while aging increases the tastiness of Bourbon, you get much less per barrel. If you want to bottle as Straight Bourbon, it has a minimum aging time of two years.

My Old Kentucky Home is located in Bardstown, Kentucky and they have the world famous Bourbon Festival every year. Photograph courtesy of http://www.wikipedia.com

Congress recognized Bourbon as distinctive product of the United States in May of 1964. While it can be produced anywhere in the United States, it is mostly associated with Kentucky. This is probably because of the limestone base that we sit upon. The water that is purified through the limestone is iron free and is touted by many master distillers as one of the most important elements in Bourbon distilling. In 2013, it was determined that about 95% of all Bourbon was produced in the Bluegrass state.

My favorite way yo enjoy Bourbon…on the rocks with a cool cube of ice!

There are many ways to serve Bourbon and it is found in many famous cocktails, as we have seen in the past few posts over this month. However, if you have a fine, well-aged, sipping Bourbon, you will not want to spoil it with any mixers or accompaniments. Serving just Bourbon in a glass is called Bourbon neat. This is one of the best ways to enjoy Bourbon on a cool, fall night or on a cold, Kentucky night in front of your fire place. Some people like theirs with a splash of water or over ice, which is called on the rocks. I also LOVE to cook with Bourbon and in many of my recipes, I substitute Bourbon for Vanilla.

My challenge for you is to go out and purchase a few smaller bottles of different brands of Bourbon. See what you like. Try them neat, add a little water, and try them on the rocks. See what works for you. There are many, many different distillers, and most of them produce several different types of Bourbon. Find one you like, and you’ll never turn back!