Posted on July 6, 2016 by callyinwonderland

Humble. That is the first word that come to my mind when I think about my Uncle Lum, a true Florida Cracker Cowboy. You could also say soft spoken, kind, hardworking, and include words in a list that would be a mile long. However, the first one that always comes to my mind is humble. This is true for many of this dying breed of man. I have watched many documentaries, read many books, and had first hand experiences with Florida Cracker Cowboys, and the first thing that always strikes me about them, is their ability to make the conversation about anything but themselves. This is probably why they

Coming up the shoot.

were pivotal in creating the cattle business that Florida Agriculture enjoys today. They didn’t get into the business for fame, fortune, or to change the world. They were born into a deep seeded tradition that gave them the love of the land. When you talk to a Florida Cracker Cowboy, you will soon see that they almost have a one track mind. Everything they talk about somehow goes back to the land and the cattle.

My family still uses horses as their main tool when herding cattle.

Columbus Lowe was born into a large southwest Florida family and at the center of that family was farming. He was a younger sibling with 13 total brothers and sisters, and everyone in the family had their role. His was to learn the land. He started working cattle at a young age and it was here that he developed his lifelong obsession. He can tell you of a time when the area that is now the Port Charlotte Town Center Mall was nothing but raw, untouched land where cattle fed on rich grasses and shaded themselves under oak hammocks. When you rode these lands by horseback, you could look for miles and the 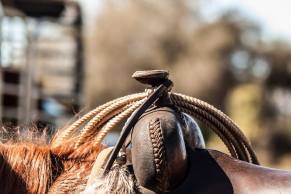 only sign that man had touched the land was the occasional fence line or pen to work the cattle in. These fences and pens are a thing of the past now, and have been replaced by office buildings, retail stores, and restaurants. This doesn’t change the fact that Lum and many like him, paved the way for Florida to be one of the largest beef producing states in the nation. The heritage that they worked a lifetime to protect has managed to survive and

He’s in his spot, the guys better be ready to start sorting!

thrive in a state where tourism and commerce appear to reign. When most people think of Florida, they immediately have a vision of beaches, mouse ears, and retirement communities. This is only a small portion of what my Florida really is. She is still a state where agriculture is king and home to over 5 million acres of land for cattle to graze. That almost one half of the land in our state that is used for agriculture purposes. Our ranchers fight hard to produce a well sought after product, making them the top producer of exported beef calves in the United States. The cows are bred here, by some of the top bulls around, calved, and weaned. Once weaning occurs, the calves are shipped out of state to be finished out. Florida provides the perfect nursery for 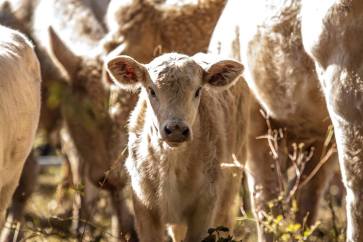 these babies to grow and thrive before becoming a pivotal part of everyday America. And to think, the first cow hadn’t even stepped onto United States soil until they were introduced by Ponce De Leon in 1521. I doubt he imagined his Andalusian cattle would pave the way for an industry that generates thousands of jobs and hundreds of million dollars for Floridians every year.

History has given these men (and some women!) the name Florida Cracker Cowboy. This comes from the noise their whips made when they “cracked” them while herding their cattle. A romantic name that has been used in many slang terms throughout the years, but carries deep roots that all true Floridians can relate to.  Whip cracking is a true art form and while it is not used as often as it once was to herd cattle, you can still find men who are upholding this tradition. There are whip cracking contests at many of Florida’s festivals and it is great to see younger generations honing their craft. Luckily, this is keeping Florida Cracker Cowboys alive for the foreseeable future.

These oak hammocks offer relief from the hot, Florida sun.

I have spent time with many Florida Cracker Cowboys, and while they may not be moving very quickly, their minds are always on point. This past February, I was lucky enough to get to photograph my Uncle Lum out with the family getting cattle ready for market. The cowboys had gone out earlier in the day and rounded up all the cattle that were on this particular piece of property and had herded them into pens that were strategically placed under an oak hammock. This is important, especially in Florida where even in February the temperatures and humidity can be enough to drench you in sweat before noon! The oaks offer relief for both man and beast from the brutal sun and offer a nostalgic setting that always makes me think of the conquistadors when they first arrived in this wild and wonderful area. Would they have rested under an oak hammock similar to this one, pushing the Spanish moss out of their way as they dismounted their horses to rest? What did they think of my Florida; did it speak to their hearts as is speaks to mine every time I come home? 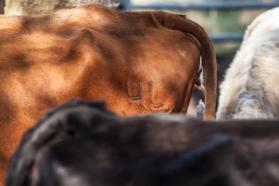 After the cattle are penned the real work starts. Ear notching for the young calves and castrating for the young bulls before they are either chosen for market or chosen to stay on the ranch. The guys think they have already predetermined these lists, but Lum, taking his place on the cat walk, is really judge and jury for these animals. He slowly walks up from his pickup truck, just in time to sort out the situation, give them some much needed advice, and climb up on an old board high above everyone else with two gates below him. One side is keep and one side is sell. He is surveying all that he has spent a lifetime building from his worn throne and everyone looks to him for the nod to start. He is chewing on the end of an old cigar that may or may not have been lit at one time and you 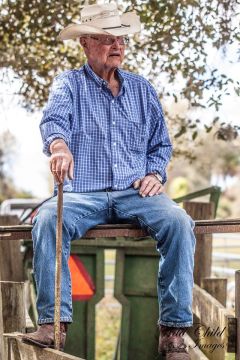 Taking stock of the situation.

can’t see his eyes for his old, straw cowboy hat is pulled down to far, giving a shadow over his face. The hat was an off white shade of yellow at one point, but years of time under the brutal Florida sun has caused the hat to brown. It’s a shade of color all its own; one worn of sweat and hard work. It’s a color you won’t find anywhere else. After he takes his seat above his pupils, the guys start running cattle into the sorting pen a few at a time. He surveys each one as they enter, knowing them individually even though he may have never met them before today. You hear them call “right!” “left!” depending on whether or not they are a keep or sell. He has no need for these words. He works his gates, opening and closing them, determining the fate of each animal, with the same beauty a conductor leads an orchestra. No one questions his decisions, and soon this batch of cattle have been worked and sorted through.

A smile from under a worn hat.

The ones who get to stay on this little piece of paradise are in a pen, waiting to be released. The others are loaded onto trailers and taken to market. Lum dismounts his perch and comes back down with us commoners. He would never want the title, but he really is king of this ranch. He’s over 80 years old and has had a longer reign than what most of us could ever dream of having. One day it will be time for him to hand the keys to the kingdom over to the next generation, and he knows they will be ready, armed with the knowledge and guidance he has spent his lifetime bestowing on us. However, until then, we will all just watch in awe as he uses generations of knowledge of keep our Florida Cattle Industry alive and thriving. 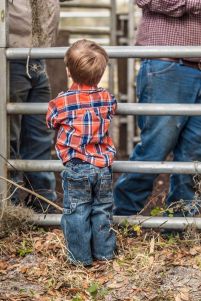 His Great Grandson, learning at the boots of the master.

He slowly walks back to his truck, done with his work for the day, and still doing more than what most of us could accomplish in a week! He gives me a grin, marred only by the cigar hanging from his mouth and shaded by his worn hat. He has achieved his goal for the day, moving the family business forward and securing a place in this world for the next generation.